Eyes on the Market: Some Observations on 7% Inflation

Inflation Reaches 7%, The Highest Since 1982

The biggest economic news item of the past week was the December inflation update. CPI was up +7.0% for the year 2021. This was the largest year-over-year increase in inflation since 1982!

Core CPI (excludes food and energy) was a bit hotter than expected, coming in at +5.5% year-over-year.

After digging into the inflation report we see that the vast majority of the recent surge in prices appears to be tied to the pandemic’s effects on consumer demand rather than the labor market. This is evidenced by the big turnaround in durable goods (home furnishings, appliances, etc.) which have unwound two decades of deflation over the course of the last two years. This huge increase in spending on durable goods has created huge price effects, magnified by supply chain shortages. While labor markets are tight, it’s not clear that they’re feeding directly into higher prices for services…yet.

Now that inflation has consistently been tracking well above the Fed’s target of 2.0% all eyes have shifted to the Fed which has correctly (in my opinion) become more hawkish than they were a year ago.

The bond market is also anticipating higher rates, and investors have been selling treasuries in anticipation of tighter Fed policy in 2022.

How have stocks performed during prior periods of 7%+ inflation?

So, how did stocks do in these environments? Overall, returns were mixed:

So what is history telling us?

Well, we’ve only had four prior instances to look at where we’ve had 7%+ or more inflation in the past 70 years.

In each of those prior instances, the S&P 500 had returns that did not beat inflation.

Does this mean I’m predicting poor stock market returns this year? Well, in reality nobody can correctly predict the market consistently. But, if I’m using history as a guide this is a sober look at what could be in store for the year. The probability for a tough year for stocks seems especially possible after three very exceptional years for the stock market (total return of the S&P 500):

The reality is, there is already a bear market in many growth stocks as over one-third of the stocks in the Nasdaq Composite are down -50%.

As discussed last week, value is being rewarded and growth is being penalized as the market expects the Fed to raise rates this year. Higher interest rates make valuations of many fast growing companies less appealing. There is certainly rotation happening as value and “finergy” (financials + energy) stocks are being rewarded while tech and growth are punished. Energy was the only positive sector in today’s trading.

In conclusion, expect inflation to remain high until the Fed raises rates. Volatility in stocks is likely to remain high as the market responds to the Fed and higher rates in the bond market. It seems value is likely to continue to outperform growth in the near future. It wouldn’t surprise me if we see a full correction (-10% or more) during the first quarter. In spite of this, my long-term view is that stocks remain the best asset class when building wealth that exceeds inflation. There will be some great buying opportunities ahead!

Eyes on the Market: 3 Things I’m Watching This Week 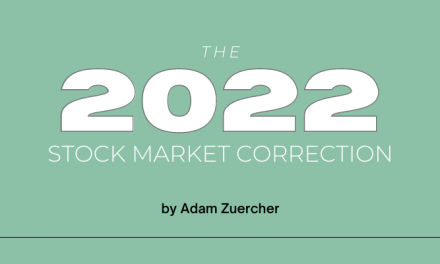